Ernest Cook Ultrasound Research and Education Institute, (ECUREI), the only one of its kind in Sub- Saharan Africa, is the leading center at tertiary level in the training of Ultrasound, Medical Imaging and other health-related courses. It was the brainchild of Prof. Michael Kawooya, the current Deputy Principal, after undertaking a Masters’ Degree of Medicine in Radiology.  Prior to that, in 1997, Prof. Henry Stuart Kasozi, the current Principal had obtained an Ultrasound Fellowship with Thomas Jefferson University Philadelphia USA at the time when both Ultrasound services and Training were non- existent in Uganda.   Collaboration with Prof. Barry Goldberg of Thomas Jefferson University, USA followed and resulted in the donation of an Ultrasound machine to train Trainers in Uganda. Two Fellowship scholarships for Trainers at the Jefferson Ultrasound Research and Education Institute (JUREI) were offered in 2001.

Filter through our courses 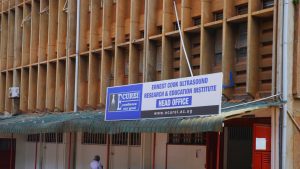 We are happy to invite you to the Ernest Cook Ultrasound and Research Education Institute 5TH GRADUATION CEREMONY which will take place on 28th May 2021 at ECUREI Graduation grounds near Kampala MRI Center, Balintuma Road. Learn More